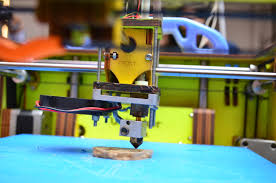 We live in polluted cities and are exposed to different emissions from mobile phones to microwave ovens.  We seem to get used to everything. But how new gadgets can influence our health? The scientists from the Illinois Institute of Technology decided to find out if 3D printers can be risky for human health and cause serious diseases like cancer.

They have tested 5 popular brands of 3D printers including the Makerbot Replicator 2X and LulzBot Mini. The scientists researched two rates of potentially harmful things in the working 3D printer: the level of ultra-fine particles emitted by the printers, and the level of dangerous volatile organic compounds emitted from heating plastic.

The team printed a standardized file from the National Institute of Standards and Technology. The file had a range of features that were thought to potentially influence printer emissions, including a combination of solid volumes, thin protrusions, holes and indentations.

As a result the researchers revealed that the level of hazardous particles and vapors depends on the   filament material used in the work and not on the printer itself. For instance, ABS emits toxic and carcinogenic styrene, while nylon materials emit caprolactam particles, which can cause serious problems with health too.

Thanks to Illinois Institute report manufacturing companies that use 3D printing technologies are aware of the indicated problem now. And many of them have already started to seek nontoxic materials for their production. We hope that 3D printing will become soon not only an effective and precise technique of making various objects but an ecological and harmless one too.