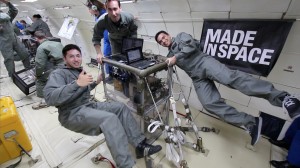 How to facilitate the International Space Station with extra things when it is hundreds of kilometers far from the Earth? The logistics of today is too expensive and difficult for NASA. Huge structures are folded up for sending them in space and then reassembled in orbit. Such transportation looks like Origami,  but NASA doesn’t have another choice or rather hasn’t had another choice before this year.

On March 23, a 3D printer is going to be blasted up to resolve the problem of getting spare parts at the ISS (International Space Station) without any connection with the Earth. This is the first producing device in space and it is aimed to make ISS more independent from the ISS crew.

Creating small parts for various appliances is not the limit for 3D printing technology in space. NASA together with Made In Space, the Nasa-funded start-up, invested and launched a new project called Archinaut. The developing system is supposed to print big-scale structures assembling by robots in space. The researchers think that in three to five years this project will come true.  Andrew Rush, chief executive of Made In Space argues: “giant radio dishes that could service many people, or do amazing science and peer deep into the universe’s past”.

There is a task that Made In Space scientists are thinking of. This is the problem of  careful usage of raw material supplies in space. “The space environment is a very valuable and unique environment,” says Mr Rush. “We can make things that would just be impossible to create on Earth.”

All this looks like science fiction but it can be our reality in near future. And the famous scenes with shuttle mending from the film “Gravity” would have looked otherwise if Sandra Bullock and George Clooney had had 3D printer on their board. Finally, remember that 3D printing is also good investment in mankind’s survival, because it gives the chance for people to live independently in space when the bad times come.