The 3D printing gradually enters our lives. And this is not only a final product like shoes and jewelry but it’s also a great deal of 3D models for medical surgeries and various science experiments.  The ecologists from the University of Oregon decided to introduce 3D printed flowers in their investigation of the Dracula orchid.

From biological point of view, orchid is a very interesting flower. It attracts insects-pollinators without nectar like other flowering plants. The orchid family uses great disguises miming food, rivals and partners of pollinators to entice them. Thus the orchid performs its reproduction function in a very artistic way.

The biologists aimed to find out what part of the flower played the main role in the pollinator attraction. They were observing the insect reaction to the identically fake flowers by adding different factors to them. In the previous studies scientists have used artificial flowers made of construction paper, cotton balls and other materials for this purpose. But it was very difficult to make the fake flowers of Dracula orchid with the usual methods so that pollinators would get interested in them.

Thus Tobias Policha, a plant ecologist at the University of Oregon, realized that he needed something more realistic and durable. Together with artist Melinda Barnadas they intended to create 3D printed Dracula orchid. Having scanned the original flower and printed gypsum molds they have got the excellent silicone orchids of different colors and patterns.

The biologists placed the new copies of orchid among the real flowers in the rain forest of Ecuador. They modified the scents and colors of the real and fake flowers to watch what flower had more attention from fungus-loving flies, the main pollinators of the Dracula orchids.

As a result the flies landed less often on the printed flowers. Why? Firstly, because there are important both real orchid look along with its original smell. Even when the original odor was added to the mimics, the flies approached very close the flowers but didn’t lend at them anyway.

The clue is hidden in the central petal of the orchid, labellum. A real flower with a fake labellum attracted flies the same as an orchid made entirely of silicone. The labellum looks like a mushroom and concentrate the smell similar with the odor of fungi that grow nearby. 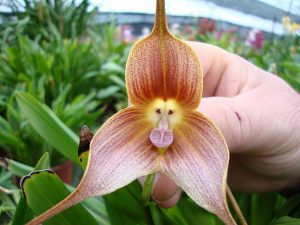 Such conclusions wouldn’t be done without lifelike silicone orchids. And we are sure that many other 3D printed mimes will appear in biological experiments very soon, because they are  simple, precise and effective to use.