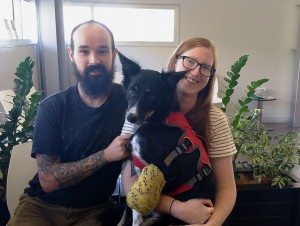 The mischiefs and wonders in the life of a three legged border collie started in 2014. He was found with a broken leg as a puppy and was placed at the animal protection agency, RSPCA at Wacol. His right front leg was healed incorrectly and was amputated in a short time. Fortunately, the puppy was adopted by an Australian couple, Rebecca Colvin and Glenn Althor.

But the misfortune didn’t get off his back. Ziggy’s one and only front leg had an angular limb deformity. He was growing up and the increasing weight pressed down on his front limb. Finally the dog couldn’t walk without pain. Ziggy underwent two surgeries to improve the situation. Firstly, a wrong bone  was removed and splinted to ensure it would grow straight. The second surgery from McGhie and Dr Lance Wilson was special because there were used 3D modelling and printing.

“CT scan images of Ziggy’s leg were used to create computerised and printed three-dimensional models of his limb. These models were then used to calculate where the bone had to be cut and how it had to be manipulated to straighten the limb so Ziggy could walk normally,” McGhie said.

The surgeons corrected the deformed leg using the calculations from 3D-printed models of the leg, holding it in place with an external fixator frame. Then the dog was placed in a special cart to exclude the weight on the operated leg for some time.  Eight weeks later there was a  happy ending  for Ziggy because he was able to move without any assistant and pain.