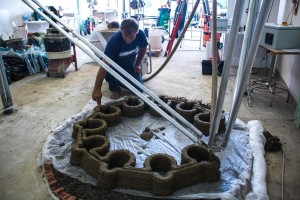 The important step in house building is to make a project and then to find a good team of builders to implement this plan in action.  Depending on the professionality of builders the house can be constructed successfully or not. What if we remove the human element from the building process to eliminate the possible mistakes and deliver the building itself to a 3D printer?

The Italian engineering Company WASP has launched a project of 3D printing houses on September 2015. They use the 40 foot tall, 20 foot wide 3D printer. The advantage of the building method is that clay and dirt are the main constructing materials for the 3D printer. It’s a good chance for the people from resource poor countries to have their own houses.

The base of the structure is a metal frame with a 3D nuzzle that builds up layers of clay step by step making the walls and ceiling of the future house.

While the Italians are testing their first prototype of such a building, the Chinese Company WinSun has already printed a five-floor apartment building and a 1,100 square meters villa.

The 3D method of WinSun saves between 30 and 60 percent of construction waste, and can decrease production times by between 50 and 70 percent, and labor costs by between 50 and 80 percent. Totally the villa costs around $161,000 to build.

The Chinese experiment has shown that the large-scale 3D printing is time and money effective. That is why the Italian engineers are on the right way to solve the Global Housing crisis with 3D printing methods.